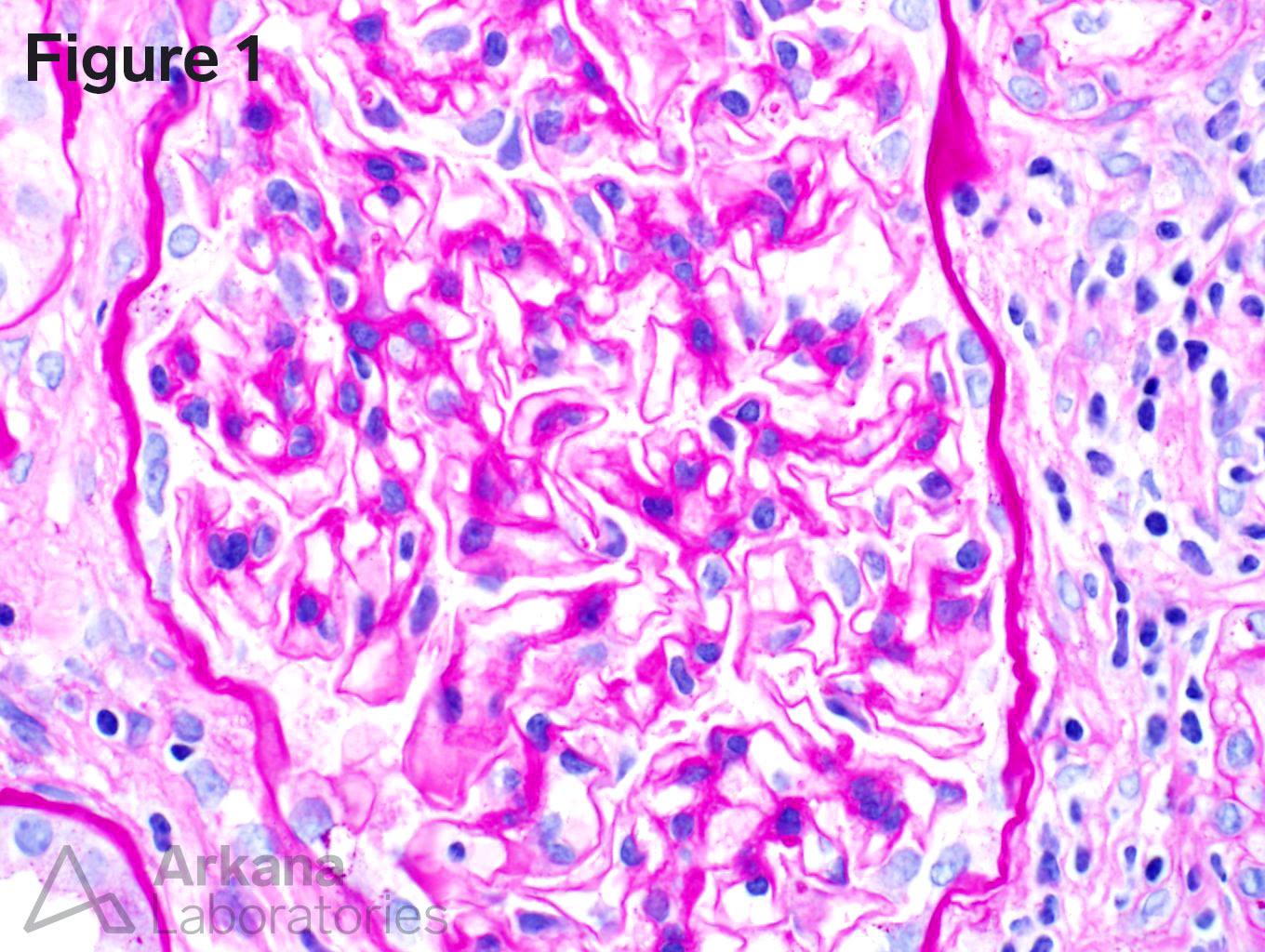 A 25-year-old female presents to the hospital with malaise and a creatinine of 3.5. She reports that she was in her normal state of health until about 2 weeks ago when she had the “flu.” The patient has minimal proteinuria and bland urine sediment. A kidney biopsy was obtained. Figure 1 shows a normal glomerulus. Figure 2 shows severe chronicity. Figure 3 and 4 show polyhedral clear crystals within the tubular lumina. Figure 5 shows an increased number of oxalate crystals under polarized light. Renal oxalosis is characterized by excess deposition of calcium oxalate crystals within the kidney. There are both primary and secondary forms of renal oxalosis. Primary oxalosis is usually caused by type 1 primary hyperoxaluria. This autosomal recessive disorder is due to an absence of activity of the hepatic peroxisomal enzyme alanine: glyoxylate aminotransferase (AGT), which converts glyoxylate to glycine. Patients with Type 1 usually present at or before 6 years of age, but can present substantially later dependent on where the mutation is present on the AGXT gene. Increased urinary excretion of oxalate results in urinary calcium oxalate supersaturation, leading to crystal aggregation, and nephrocalcinosis. Type 2 hyperoxaluria is caused by mutations in glyoxylate reductase-hydroxypyruvate reductase gene (GRHPR) and Type 3 is due to a mutation in 4-hydroxy-2-oxoglutarate aldolase 1 gene (HoGA1). Secondary forms of renal oxalosis are much more common in clinical practice and can be due to enteric hyperoxaluria (gastric bypass, chronic pancreatitis, small bowel resection, or malabsorption), ethylene glycol intoxication, vitamin B6 deficiency, excessive ingestion of vitamin C, dietary substances rich in oxalic acid (parsley, nuts, star fruit, sweet tea, etc), and drugs (such as methoxyflurane, Orlistat, Praxilene, and Cox-2 inhibitors). Conservative treatments such as large fluid intake, orthophosphate, a trial of pyridoxine therapy (in Type 1 Hyperoxaluria), and elimination of foods rich in oxalate are mainstays of therapy. Combined liver-kidney transplantation has been used with some success in Type 1 primary hyperoxaluria.